In our last round of pig breeding, we decided to keep, raise and eat the offspring of our sow Pebbles, and breed her again because she had a good disposition and because we had a soft-spot for her, given she was the lone piglet from the difficult birth her mother had, and we had bottle-raised her on goat milk ourselves. But, as the piglets eventually turned into decent-sized pigs, and with the possible difficulty of finding a large enough mate for Pebbles, I decided to change the plans and revert back to the old way of doing things, where we process the mother as well and keep an offspring to continue the pork perpetuation.

Here is Pebbles and most of her offspring before taking Pebbles in (she’s on the left, one female had already gone to the Bunkers as a next breeder for them): 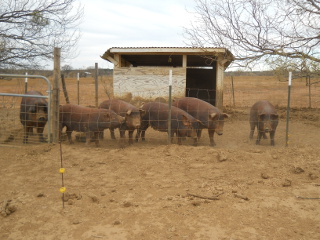 And this is Pebbles next to the offspring we are keeping for the next round of breeding, which we decided to call Lulu. We decided to keep her because she has more of the Duroc characteristics: 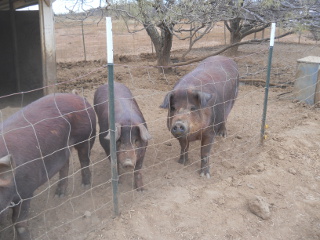 And so, we took Pebbles and two of the males in to the butcher (two other of the offspring also went to the Bunkers).

Once getting the meat back, we wanted to continue to practice preserving without canning or freezing, so we had some strips of meat cut from one of the younger pig’s hams, and put them in the salt brine: 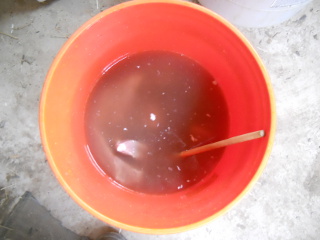 And then I hung them in the meat dryer: 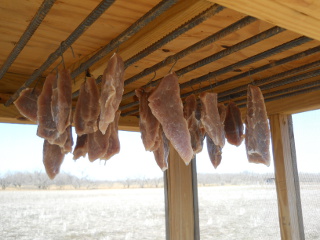 Then, it was time for the Pebbles Pork Chop Party fellowship meal! We held it on a Lord’s Day fellowship time, so every household contributed to the meal.

Here is all of the eating goodness: 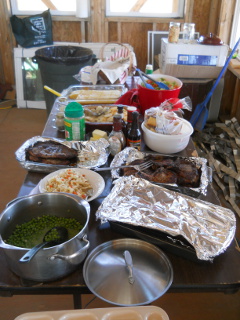 And the group communing together around the table: 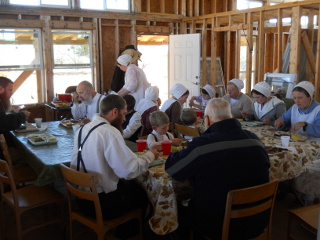 And young Annabelle enjoying the time: 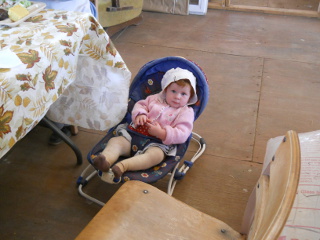 We are so very grateful to the Lord for His provisions of the pig meat, and the opportunity to gather in His name and share His beneficence together.