About a day after the hen from the second batch of chicks went broody, another hen, one of our Game Hen breed I believe, went broody as well, in a garbage can in the barn, if I remember correctly. And so, we moved her into the piano room with a set of eggs under her; and by God’s graces, a day after the other hen hatched out her chicks, this one did too! Nine in all, and eight are still going strong! 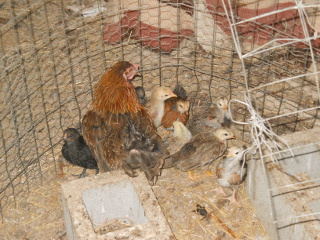 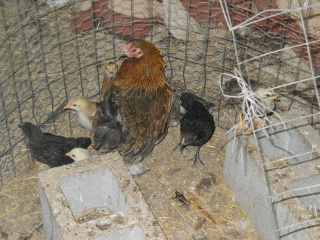 And below is their video. There was one chick hatched out that was cripple — it couldn’t stand up and would just lay on its side, moving its legs almost swimmingly, trying to stand up. If you got it standing, it would just fall over. I tried working with it, feeding it to try to keep it alive, making a runway for it to try to learn to walk. I called it Tiny, because it was such a small little thing: 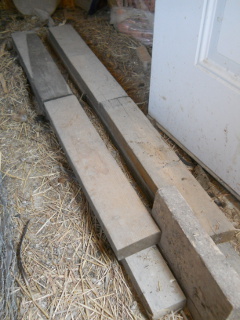 And for a while I thought it might get it — it would walk along, eat the food I had laid down in the trough, even preen a few times, and seemed to be getting better with its balance; but in the end, sadly, about a week after hatching, it died.

Still, one thing that was interesting to me was that I would place it in its runway, come back later, and it would have crawled its way out, and slide-crawled itself through the 1-inch chicken wire around the cage area, I assume to try to get to its mommy. This happened at least twice. It was an inspiration in dedication to me, and led me to think and then pray that we strive after the Lord Christ Jesus the same way. May we be able to hide under His wings, and may He maybe grant a sense of that (see these several Psalms references).

Although I wasn’t able to capture those times with Tiny, you can still see it in this video:

We are once again very grateful to the Lord for granting us the continuation of the flock, and we pray He always glorifies Himself through these things, including in His sovereign giving and taking of anything, in accordance with His will.