It’s been a bit since the last one, but this past Lord’s Day we were able to meet to record the next set of Psalms from the psalter we use. We’re grateful to God for this opportunity, and to do this together as a fellowship, and I personally benefit from being able to listen to them. I have often found myself waking up with a psalm in my head, and to me, what better thing to have rolling through my thoughts than prayers and praises to the Lord!

We always pray God glorify Himself through these things, and we pray He might impart graces to His people through them.

Here come the second batch of chicks! Again, God graciously granted another set to hatch! This mama we set up in our first barn stall. At this point, I’m not sure how many she hatched out. In the video I say maybe ten, but I sort of remember only eight when I finally started counting, but now she’s down to six. I know I found two out one time and put them back, and I know I found one that had died in the cage area, but I’m not sure what happened to others if there were any. If so, I’m thinking maybe they got out and then maybe something got to them.

But, we are thankful for these six, and here they are: 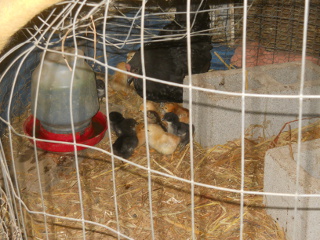 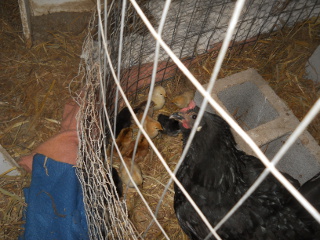 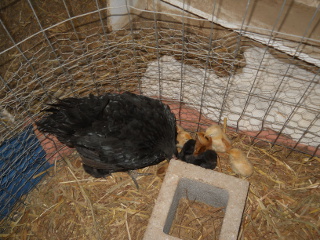 Again, we are grateful to the Lord for granting this next batch of chicks!

For a few years now, we’ve let our goats out into our inner field, which is between the goat pens and the barn, as this area is always growing something naturally…mostly weeds, but the goats eat just about any of it. Well, in order to be able to do that, I had to put up a fence around our orchard and pecan trees, but I didn’t want to take the time to put up a permanent fence, so I was hoping to be able to get away with just hand pulling some fencing around some lightly-pounded t-posts.

This worked well, until last year, and the goats started getting into the orchard, and ate back one of the pecan trees. So, it was time.

We’ve had a whole bunch of rain this Spring, thanks to the Lord for His graces and mercies. But that has slowed things down, so I’m only partially done after several weeks, but here is progress…

I originally thought I could just bury the landscape timber posts in mud, but the rains showed me that that wasn’t going to work — it just wasn’t going to be solid enough for stretched fence. So, after unburying them, I concreted them in. I’m trying to get away with only using a single angled brace on the corners. I also added distance between the current trees, and brought out one side to allow for another row of trees. I figure I can just continue to move that west line over the years if needed to add room for more rows. There is also a gate space planned along one of the lines, big enough for the tractor to drive through: 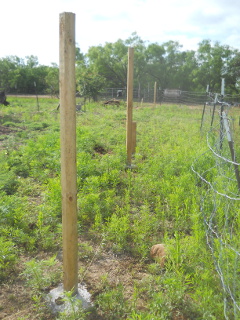 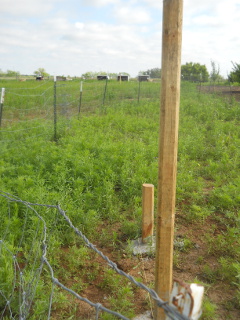 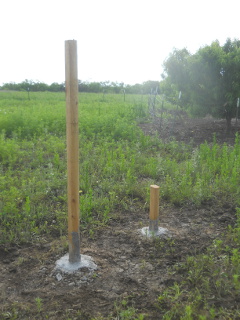 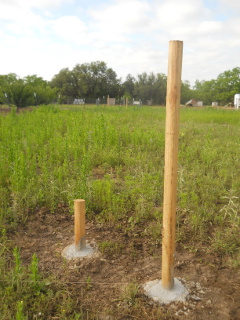 Here’s a diagonal brace installed. I notched out the the bottom of the dead-man post using a reciprocating saw and hammer and chisel, worked the angles on the brace until I got it right, and then notched out the upper side of the main post. Then, I drilled pilot and counter sync holes for the 3/8 by 6 inch lag bolts and washers: 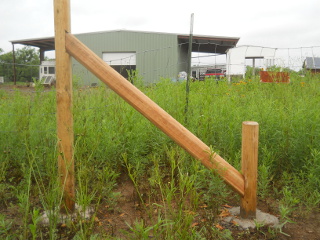 And so I didn’t have to dig a post hole on line that already had fencing, I thought I would try using a t-post bracing system for one of the ends (sadly, once I started pulling the fence, this ended up not working — too much pressure on the aluminum pieces and the t-posts too loose in the ground), and I had to put in the wood posts and brace): 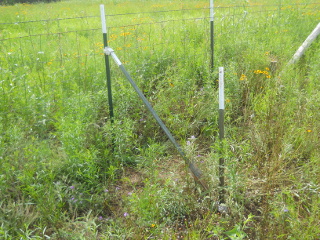 With the posts in place, using a string line around the perimeter, I pounded in the t-posts. Sometimes you hit rock, but sometimes those rocks are smaller, and it is possible to pound through/around them, although that almost certainly brings on the blisters, at least for me it does. 🙂 : 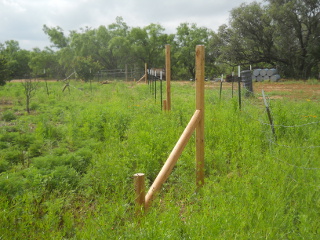 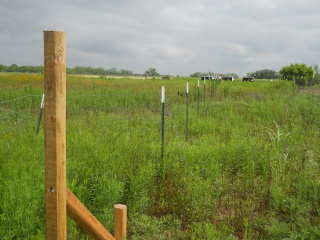 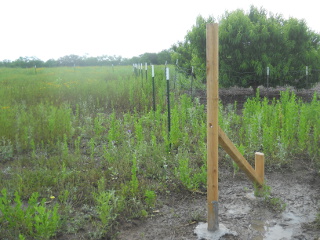 And that’s it for now. Yesterday was dry enough for me to work on the fencing some, so I just started to tie off a couple of the ends of the net-wire fencing; but Lord willing, this will be ready soon. Actually, because we are sort of out of hay for one of the groups of goats, and it’s too muddy to get any right now, I have to go move the temporary fence and hand pull it around the new fence line because we need to let them out today.

We thank God for His provisions to be able to put up the fencing, for the rains, the mercy in the weather, and for the free goat food He’s granted to grow!

Apparently, God’s Spring-season “Broody Time!” memo went out, because He has begun to graciously grant the chicks to start a hatching!

This is round number one, which we usually start in the mini-chicken tractor. It’s an Australorp mama that hatched out six chicks, all of which are still going strong!

Here they are at just a few days old! It’s amazing to me how they can be all squashed up in a little egg like that, and peck their way out — more of God’s miracle ways! 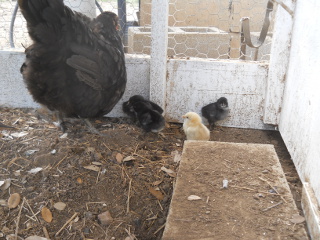 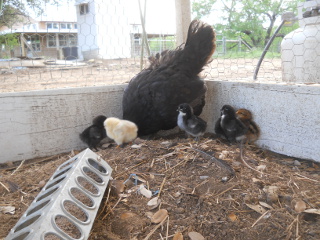 Here’s a video of them:

We are always very grateful to the Lord for Him perpetuating His animal provisions!

A little over a month ago, with the weather looking like it was going to hold and not bring another freeze, it was that time of year to begin the garden! Always a joyous time of hope!

The War of the Weeds

As always too, there is a constant war with the weeds. Over the Winter, they certainly had their way with the garden areas: 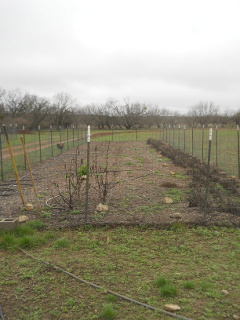 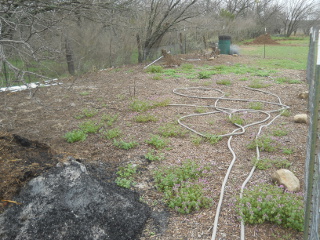 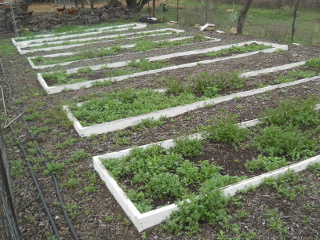 But I had the tool and the power! 🙂 These hoop hoes work great! 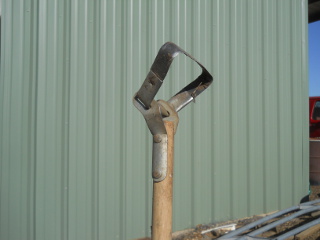 And here are the results! 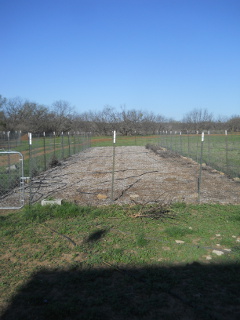 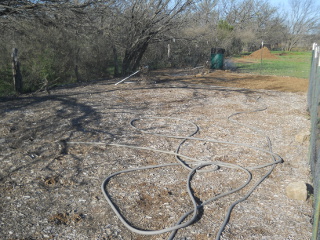 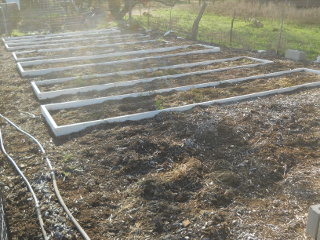 May the Spirit of Christ weed the garden of our hearts continually by His almighty power!

Once I figured we were clear of a freeze, we got to it, sowing seeds. Here Sue is helping: 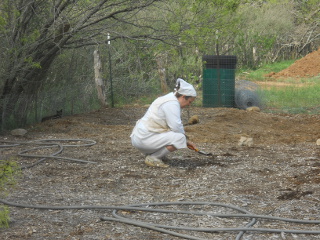 We also discovered that a zucchini we had planted last year decided to start growing now! 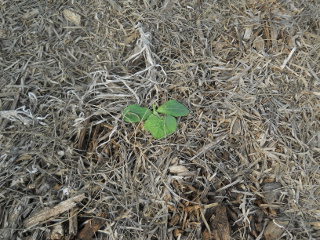 And here we are as of today, freshly weeded again yesterday. 🙂 I’ve been a little disappointed because a lot of things didn’t germinate, not to murmur as we know all of these things are in God’s sovereign and wise hands, but to maybe understand if I’m doing something wrong. We’re still learning about planting in the mulch beds, and perhaps I really need to get them started in small containers first. Also, someone here asked if the seed was old, and it was, so I’m hoping that’s the real problem.

Anyway, we are thankful for what the Lord is granting! The beans always do great around here. There is also some squash to the left. Between them were peppers, but none of them sprouted: 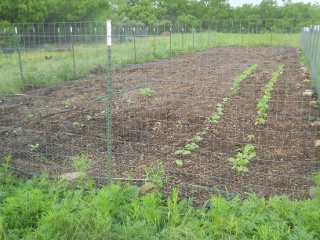 These are the tomatoes. We’re trying putting them in the shaded area to see how they do there: 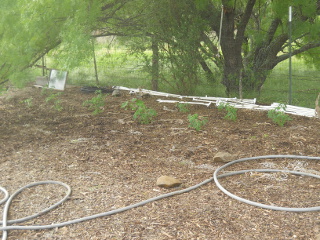 And this is that zucchini from last year! That’s kinda funny to me. 🙂 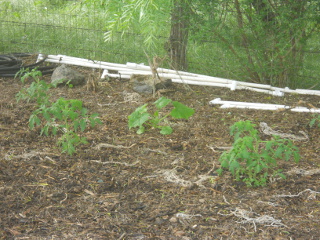 And if you look closely, you can see just a few others, I think maybe a pumpkin, and maybe some more okra: 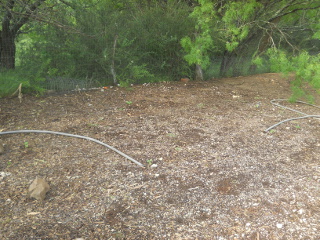 I thought I’d try starting some more in some good soil, but only the okra (I believe) is coming up. This might help confirm that “old seed” theory: 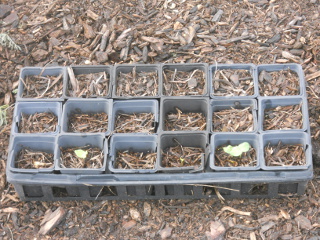 We are always thankful for the provisions the Lord grants, even daily for our daily bread! We pray He continues to direct us in these agrarian activities.

May He grant us good soil in our hearts, not hardened (where Christ and His truth make no impact and are stolen away by sin, temptation and the devil), not stony (where faith withers under trials and persecutions), nor thorny (where they are taken away by the cares of the world). Mark 4:4-20

Around the time of our last calf, Mateo, was born, we found another calf in tow, this time with our cow Holga. The calf is our first heifer of the year, and because of her creamy color, we’re calling her Natilla, which is “custard” in Spanish. Where she got that color I have no idea. 🙂

And here she is: 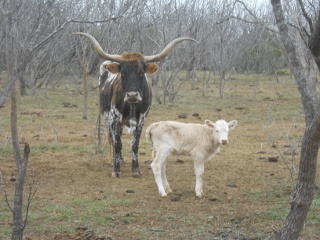 We are very thankful to the Lord for the continued safe and healthy delivery and calves, and for His continued provisions for them!