The Lord has graciously kept a-coming the little chicks to be hatched out! In this post, I’m including both groups 3 and 4.

Here is group 3, in the barn stall. I don’t remember well, but I think she hatched out six, and they’re all still going today! 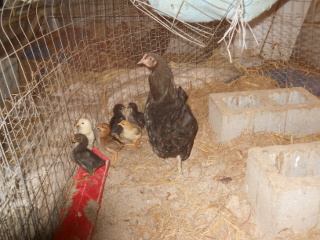 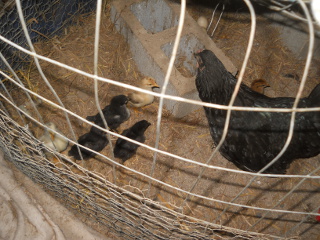 Group 4 ended up, and still is, quite interesting. We had this mama in our summer kitchen pantry, with 12 eggs under her, and I think for the first time, we got 100% hatched out! Neat! Thanks to God!

One day though a few weeks into it, I noticed some of the chicks started getting that sick chicken look, where their head starts to rest back on their neck, and they start standing around not doing “chicken things,” and with their wings partially pointed down. With that, we usually start an ionic 600 ppm silver regimen of about 1/4 CC 3-4 times a day; and if they’re not eating, I mix in 1 1/4 CC egg yoke and 1 1/2 CC goat milk. Well, before I could really get things going, two died within a day, and probably half or more of the ones left were showing signs of sickness. Uh oh. We’ve never had a disease sweep through a hatching of chicks before like this, that I can recall.

I figured something in their environment was causing the issue, so we moved group 2 out of the barn into our pen area with group 1 that we had already moved, and moved this group 4 into the barn, and started the silver (and yoke/milk regimen where needed) on all of the sickies, plus silver even for the healthy ones morning and night.

Thankfully, by God’s graces, after over a week now, it appears the “bleeding” has stopped. We’ve lost no more, and most appear to have turned the corner. The “worst” chicken baton has been passed around a few times to different chicks, and there is one holding it now, but thankfully it’s only one, and Lord willing, this one will pull out of it too. As of today, I’m trying to back off the regimen to giving silver for all of them in the evening, and morning and afternoon for only the sick looking ones. Thankfully too, the mommy chicken doesn’t seem to be affected with sickness.

I plan to clean out the pantry of the summer kitchen really well and probably spray down the concrete with white vinegar or something before putting any more chickens in their for brooding.

Never a dull moment around here! But the Lord was merciful in allowing us to keep the ten currently alive! And here they are about a month ago when all were still going: 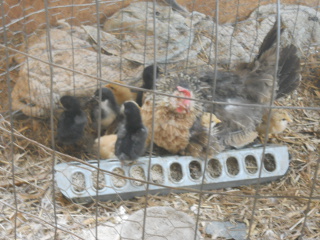 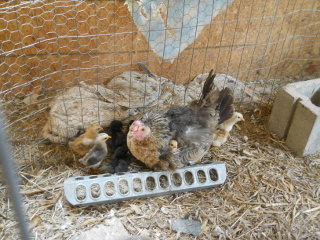 And their video too:

As always, we are grateful to God for His continued provisions, and Him granting the healing He has on most of the ailing chicks!