Even though most of the piers of our house were built on top of boulder rock underneath the ground surface, apparently on at least a few of the piers, that sadly hasn’t been good enough. One day I was looking longways down the south beam and noticed a distinct sag — at least a couple of the piers had definitely dropped some. Not a bunch, but enough that I figured I had better do something about it. When I was doing the upper south siding, you could see the dip in the roof in that area too.

If you look closely, you can see the dip in the beam around piers two and three from the far end: 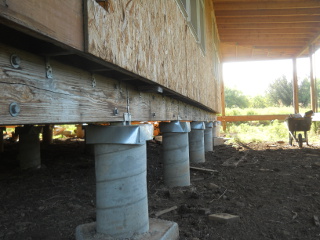 But how to go about leveling the beam?

Well, I researched plastic industrial spacers, but those ended up being fairly expensive. And then I thought I would just use 2×4 yellow pine spacers, since the beam 2x10s are made of yellow pine.

And then, how to lift a house. 🙂 After some quick research there, I found some quite inexpensive 20 ton bottle jacks; and after reading the reviews of people using them to level houses, I figured a couple of those would work well.

Once I received the jacks, it was time to proceed…

Here they are lifting the beam. The two work just great! It was really weird jacking up a house. 🙂 In the end, I found I could use just one jack, but I also figured it was good to have a backup, so the house wouldn’t come crashing down in case one jack gave way. I found too that plywood on top of the bottle jack held the best with the pressure from the bottle head: 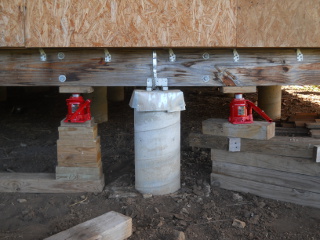 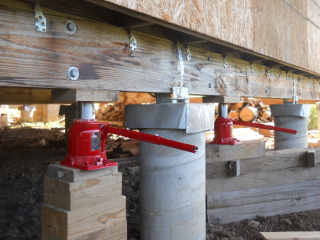 Here you can see the space between the beam and the pier bracket: 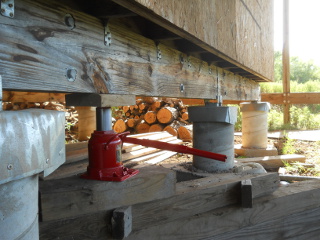 Once raised, instead of trying to use 2×4 wood, I thought to use leftovers of our cedar siding fence slats, which I figured are going to be fairly durable and hopefully strong enough, being made of cedar; and they’re already 1/2 inch thick, which would work well for the various spaces I needed to fill: 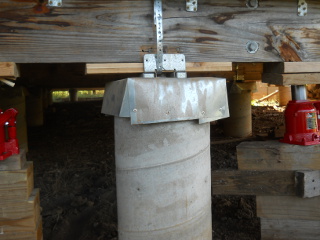 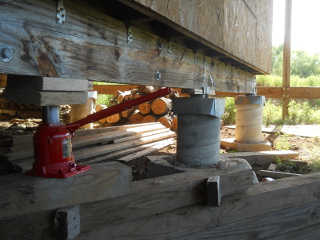 Oddly, once lowered, the beam on that end wanted to torque outward, away from the house, in order to be set in the middle of the pier bracket. That I assume isn’t great, as it appears the pier is maybe dipping on one side. Hopefully it’s done. But I needed a way to push the beam back to a more vertical position, so I used a floor jack and 2×6 board: 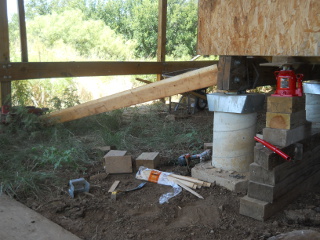 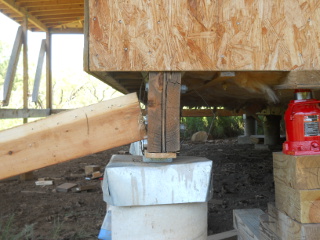 And I needed something to hold it in its new place on the pier bracket, so I used cedar slats again and shims: 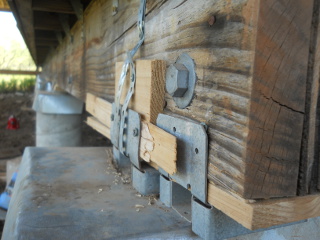 But, it all seemed to work for now; I pray things don’t move any more. And here is everything in place. The worst sag ended up being 1 inch, with others at 1/2 inch, and I ended up lifting piers one and four as well: 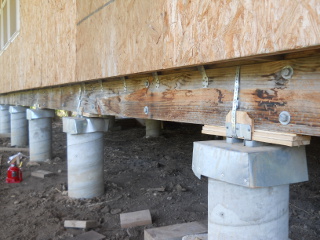 And a view down the beam again, this time more level: 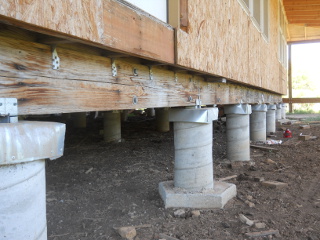 Again, we pray things don’t get any worse; but we are thankful to the Lord for allowing this to be successful, for the safety and ideas He granted during this process, that the house hasn’t toppled over by now 🙂 , and for the continued progress on the house.