Trying to learn from my mistake of how we handled turkey moms wanting to sit out in the woods by just trying to put them in the barn at night but them going right back to their nests the next day, and us loosing one of our sitting hen turkeys earlier in the year because of that, this time when Trina our original turkey started sitting, we grabbed her and put her and her eggs in the summer kitchen.

Well, thanks to the Lord, that worked out much better! With those eggs and some new ones she laid, and hoping at least some of the eggs were fertilized, she indeed hatched out two new chicks! 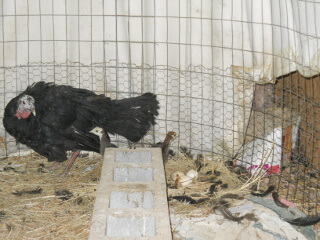 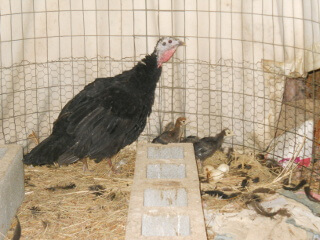 They don’t always get very far, not even to two weeks sometimes, as we’ve had them die young in the past, but I also think some of that was due to me getting too close to the mama and causing her to panic and them maybe getting stepped on. And so, I tried not to do that as much, or much more slowly, and by God’s graces, the chicks are still going! Here they are just the other day: 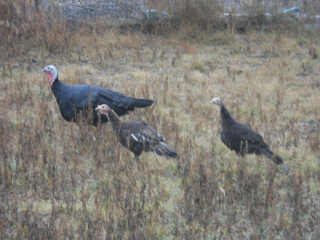 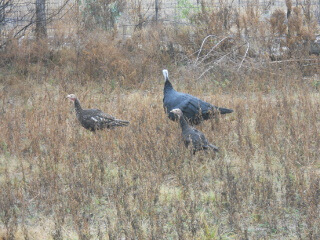 And here is the video of their life adventure so far. The introduction of them to the flock didn’t go so well, and Trina was picked on a lot, but eventually she apparently got tired of it and went on the offensive, and that helped back off everyone:

Also, the young turkey in the last turkey chick blog post mentioned above, which we called Halia, ended up being a tom. Ha! And so, we’re going to call him Halio now. 🙂 It seemed to really take him a long time before showing male characteristics — only recently have we discovered this.

He is on the left in this picture: 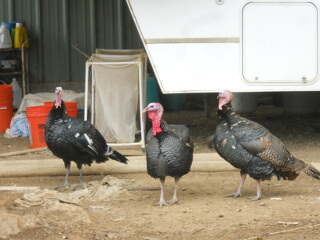 And here is one of all of the flock minus Trina and her little ones: 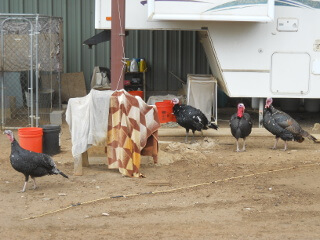 Once again, we are very grateful to the Lord for these provisions, and the continued health and safety! We pray they go to uses that glorifies Him and benefits His Church!