We thought we would catch you up on how the garden ended up in Fall of last year, including our foray into the adventure of sweet potato growing, and where we are today!

This is the one plant, a broccoli, that grew from the first Spring planting. I have picked off a few broccoli heads and have eaten them as I’ve walked by 🙂 : 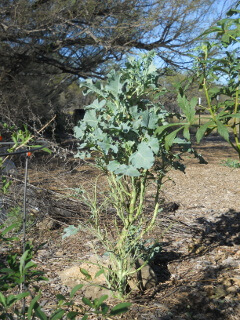 Here is our gogi berry plant: 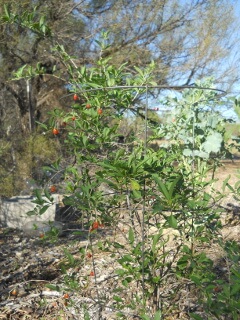 And these are our blackberry plants: 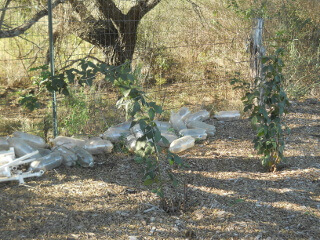 Here are the okra plants third week in October: 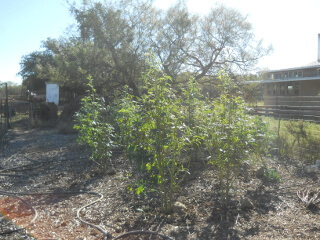 But then the freeze was coming, and so we covered them. They looked a little creepy like this actually… 🙂 And sadly, they still didn’t fare well, and so that was about the end of them for the year: 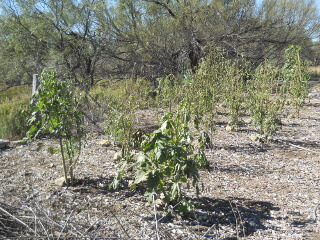 But before that, we thought we would try to save some okra seeds this year to plant next year as part of our continued effort to get sustaining here. We pray God might grant this to work! I mentioned in our last real garden update that we planted sweet potato slips this year. This is our second attempt, with the first one in our raised beds only yielding a few small ones. 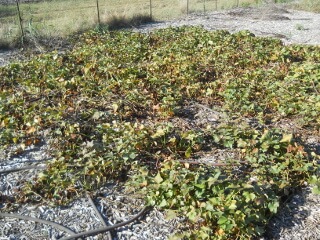 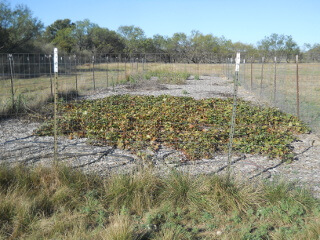 This year however, and I think it has a lot to do with that we’re using the forest bed mulching technique we’ve discussed before, God graciously granted some quite nice ones!

We harvested the beginning of October. The first one I pulled out was half rotted, very mushy, and I was worried they all would be like that, but most were thankfully just fine! You’re supposed to be very careful pulling them out so as to not damage the tender skin, which hardens later. 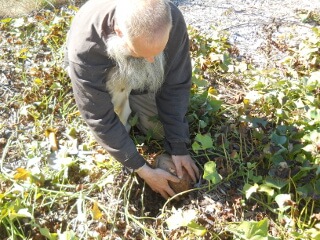 Here’s a stack of them: 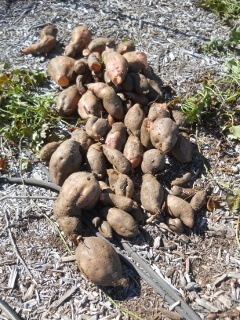 And Sue with an American football-sized one: 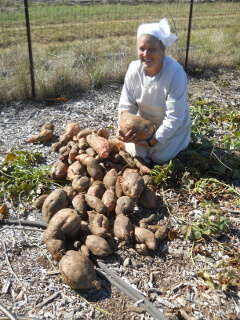 And this is just to give a size perspective: 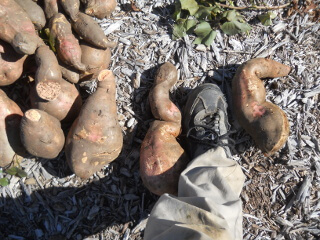 Here they are in the wheelbarrow being taken to the house for curing. Using the information from a website about curing sweet potatoes, we let them open-air cure just on the ground in a couple places in the house for probably about three weeks: And then wrapped them up individually in newspaper to go into the root cellar for another six weeks. Apparently the longer you can wait to harvest, even just after the first light frost, and giving them that long to cure allows the sugars to form in them, which gives them a good taste, and without which they apparently taste very bland: And finally, last week, we started pulling them out of the root cellar, and they appear to be still ok….yea, and thank the Lord!

Here, Sue is putting them into a meal: 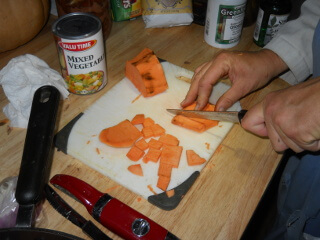 And into the pan (although there is one store-bought mixed in). But, they do indeed taste great, and again we are very thankful to God for these provisions off of the land! 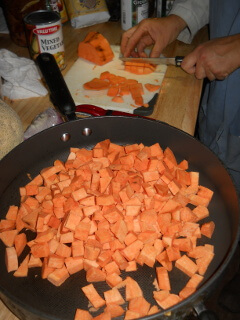 Since we have larger garden areas with which to be able to plant both for Winter and Spring, we are attempting garlic again this year, planting cloves the Stongers graciously gave us. This is just this week after the big freeze we went through here: 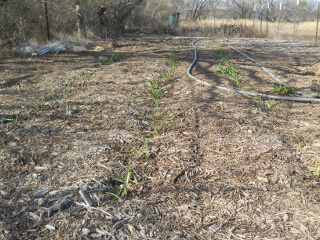 And the wild lettuce, which I believe is the prickly lettuce I mentioned before, is coming back too! 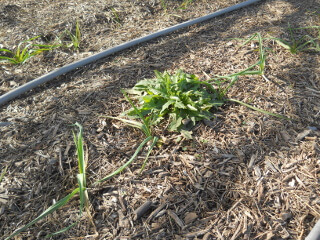 As always and again, we are very thankful to the Lord for His providence in granting sustenance from the gardens! We pray He might continue to, as He will, and that He guide us into more and better ways to live off of the land in direct dependence on Him!