Song – Jehovah is His Name!

Some years ago, I thought I should learn the names of God — what He calls Himself in His word — so that I could acknowledge Him as He has declared Himself to be acknowledged. I believe in the regulative principle of worship, in that, the Bible, and thus God Himself, declares how He will be worshiped, and that is to be our sole guide. Since He has given Himself many names, a few of them I knew already, like Jehovah-Jirah (our provider — I even wrote a blog post on that one), and Jehovah-Rapha (our healer), but I wanted to be able to know more of them so I could call Him those in my prayers.

Well, I did a search, and I’m not sure if this is the exact page I found that first time, and I don’t think it is, but it does have the names I learned way back then: Redemptive Names of God and What They Mean, and here is another site that has a similar listing: Names of God (I am not vouching for the rest of the content on these sites):

While these have manifestations in the temporal world, they really are more about the spiritual relationship of God toward His people.

Also often used in the Bible:

Fast forward until late last year. If you’ve been following our blog, you’ll have seen I’ve written some hymns or lullabies that were based on little tunes I came up with about our animals, which you can read about here under our blog’s music label.

One I’ve had for a while is for our dogs Brodey and Nessa, and the words went like this:

Brodey so-squody, he is not a grody toady

Those covered the first two measures, but with some tweaks to the 2-measure melody, I eventually filled out the whole tune into a song. I “sang” it for Sue and she thought it would make a good song in the round. Hmmm…..

I struggled to come up with lyrics. But one day, I was thinking about the names of God I had learned, and since there were eight of them, which goes into music evenly, I wondered if I might make that fit into the song — the Jehovah names of God and their meanings, and with that, it would be easier for others to learn them. It might just work…

And so, I started trying to work it out, and God granted I was able to indeed work the lyrics into the tune with some tweaking of the music — Jehovah is His Name! And it worked nicely in the round too!

Here is the sheet music: 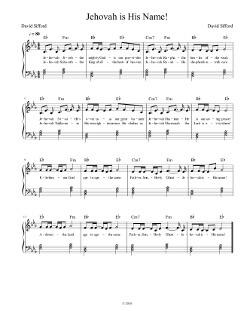 And a PDF:
Jehovah is His Name (PDF)

And an instrumental audio version:

Jehovah is His Name (MP3)

Here, Sue and I sing it with the accompaniment:

And here we are acapella, in a four-part round starting every two measures:

I think it worked out fairly nicely, and thanks to the Lord for granting this to be able to learn His names and acknowledge His greatness, mightiness, love and care!

In trying to find the original website that had the eight names I learned, I have since discovered there are many other names of God in the Bible (again, I cannot vouch for the site’s content), but it was nice to be able to take these I had learned and put them into something perhaps usable for God to glorify Himself maybe in some way. 🙂

May His name be praised forever; blessed be the name of the LORD!