Diamonds Are Not a Girl’s Best Friend

One night late, when it was dark, Sue heard what sounded like what I call heat bugs (I think they’re cicadas) out here, that make a constant higher-pitched sound. But then she thought, that wasn’t quite right…not quite their sound.

She looked toward the sound, and saw about 15-20 feet from the east side of the porch of our house our new resident stray cat laying down looking at something in the direction of the noise. Sue got closer, and realized he was only maybe 4-5 feet away from a very big diamondback rattlesnake! Wow!

Sue came and got me, and I got the .22 rifle out (thanks again to grandpa Bernie!), and we went out there with headlamps on. Because of the situation, I decided I needed to shoot even with the cat still there.

I did. The cat bolted away. I got closer, and took another shot at the head, although I think I actually got him in the head the first time, because the second shot to the head didn’t seem to make any difference. At any rate, I finished it off by using a shovel to mostly detach its head.

The cat ended up ok, no bites and no bullets, and we were thankful it appeared no other damage from the snake or otherwise.

But wow again! It was a biggie! Probably the biggest we’ve seen around here, perhaps at least 2 1/2 inches across at its widest: 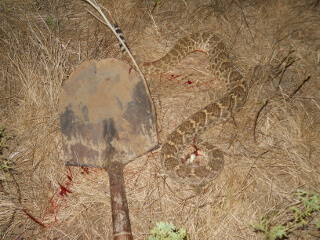 And what was that I was saying about diamonds and girls? (BTW, this was an action unsolicited by me 🙂 ) 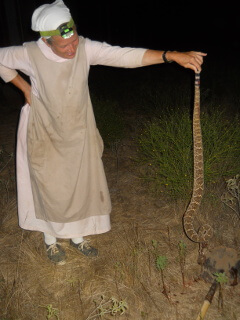 Also, I ran a video of it so you all could see. Remember, snakes’ nervous systems aren’t only in their heads, so they keep moving a lot, even after being dead (which is kinda what makes this video fun, IMO, in a creepy sort of way 😀 ):

In the end, we are very thankful to the Lord nothing appeared to get hurt, that Sue saw it, and that we were able to remove a deadly creature from the land. We thank God for His mercies!