Part of our plan for our animals was to rotate them through a set of pens, which would provide various types of fertilization in an effort to revitalize, improve and maintain the efficiency of the soil. Also, with the need to separate out our male goat from the female goats to control the breeding process, I decided it was time to add a couple more pens to our current set of two pens. Our neighbor Kelly was looking for some work, so we hired him to build these for us.

Before starting on the new pens however, some work needed to be done on the previous pens to bolster the support structure of the wood posts. On a few of them I had hoped to get away with just a single post without supports. Even though I didn’t stretch the fence that tightly, it still had been putting enough pressure on the posts to begin to pull out of the ground a little. And so Kelly added some “kickers” (the diagonal posts) and “dead men” support (the small posts to which the lower part of the diagonals are attached) to help with that problem. This also would set a better design precedent for the new pens. Further, in the way I designed the first two pens, I had the entry gates for each pen (which were 12 foot gates in order to allow for the driving through of the tractor and disk plows) next to each other so they would share a common post to which the opening side of the gate would latch. This was in order to try to use fewer posts. Although not perfect, this has seemed to work fairly well in being able to move animals from one pen to the other: 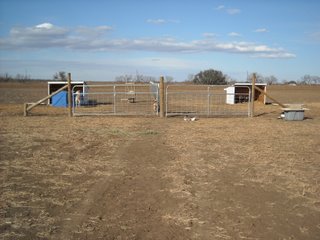 However, in adding the next two pens, we could use this same design between them; but if we were going to be able to move animals from pen 2 to pen 3, it would need to be done through gates that would be nearly 200 feet apart, which would probably require a pathway between those two pens. And so instead of that, Kelly added a gate to the side of pen 2 that would allow for free movement between it and pen 3: 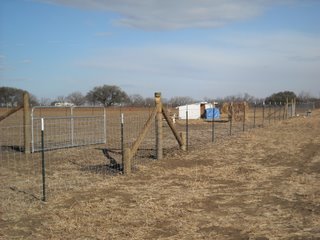 Then he set to work on replicating pens 1 and 2 as pens 3 and 4. We plan on adding a 5th pen at some point, so he implemented the same pass-through on pen 4 that he added to pen 2: 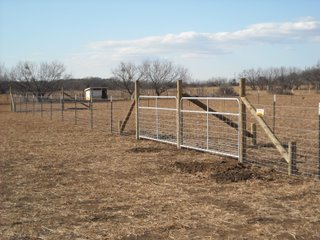 We thank Kelly for his work, and once again for the Lord for His resources and provisions. We pray that God always guide and direct us in our decisions in how to build our homestead; and that, despite ourselves and any lack of understanding or foresight, He lead us to do the right things and to those that will work well in the future, for His glory.