With the porch post cross beams now in place, it was time to move onto adding the porch rafters and plywood. I wanted to do this so that we would have something to walk on when we starting putting up the main roof.

We started with a header plate against the house, to which the rafters would be fixed. Eventually, the plan is to lag bolt this plate to the wall studs: We needed then to position the cross beams equidistant from the house. Here are some braces in place to hold them there: 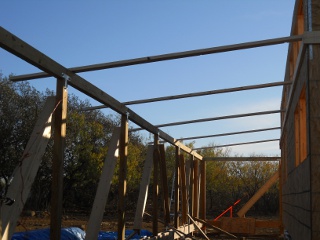 And then the rafters started going up: 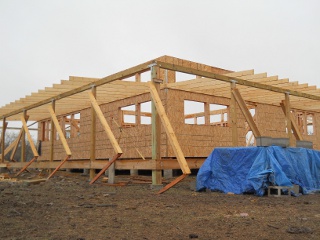 Mr. Gurau, who has been helping with the house, cut seats into the rafters as well, so more of the rafter is touching the cross beam, thus making it sturdier: Once the rafters were in place, it was time to run a chalk line across each rafter, cut each rafter, and install the face plate: Here is how Mr. Gurau did the hip corners of the porch roof: 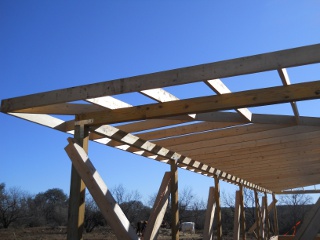 He also added some of the rafter hangers now in the corners to give them more support, as the hip rafter itself holds most of the corner weight: Once the rafters and face plate were built, it was time to add the plywood on top. It was recommended that we use actual (CDX) plywood, 1/2″ thick, rather than OSB, as the CDX will stand up to weather better, and the underneath of the plywood at best will be painted only (and maybe not even that): And here are some pictures of all of the plywood installed: 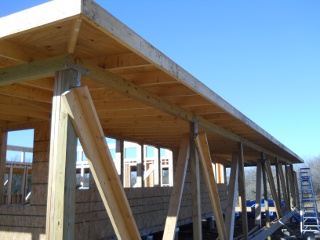 Here’s how the hip corners look from the top: It’s been a long time since this whole house project started, and with being able to stand in the shade of the porch now, it’s starting to feel like a house. It’s also starting to get a little more exciting; but we’ve learned out here to relax expectations, as most often things don’t go according to our plans (which, if we trust God and His plans, is a much better place in which to be!). This is the view out the front door: 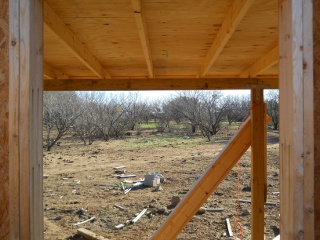 And out the great room windows: 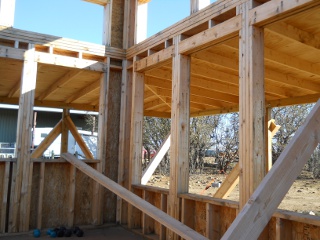 And here’s a full external view of the porch roof: Here’s a calf enjoying the new shade too! We are thankful to the Lord for allowing continued progress on the house, and for the help in Mr. Gurau and his expertise.