A House – Update XXI – The Bedroom

In continuing with our house we’re working on, back in the fall, I was hoping to be able to start working on finishing the bedroom so that we could be at least sleeping in there for the winter, with maybe even a small wood burner in place that we plan to have in there. But, resources didn’t really allow for that to come about, although we are grateful to the Lord for allowing us start to make some progress on the bedroom.

I believe it was back in the fall when I was able to get the insulation required for the walls, and here it all is installed:

This is the south wall: 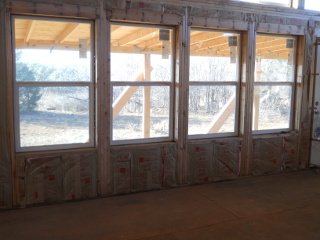 And the west wall: 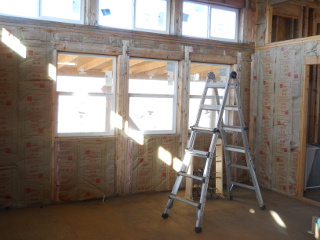 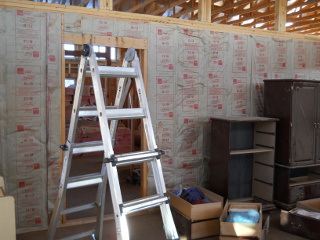 And the east wall: 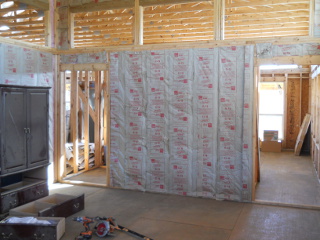 And then, just this last community work day (which are the first Wednesdays of each month), the men came over to help put up the ceiling material, which was next on the agenda. I spent some time trying to price out the best deal that also might look kind of nice, and that could be installed fairly quickly; and so, I decided to go with what’s called “rough shod” plywood, which is a less expensive form of “T1-11”-looking siding.

It took three of us on ladders, with two helping below to hand us the plywood and screws (I decided on tan-colored Deck Mate screws, so that they would hopefully hold better than nails and would also blend in color-wise).

Here is the first row done. We decided to starting in the middle and work our way toward each side, in hopes any error in the squareness of the room would show less than if we started on one side, which might cause gaps between sheets and between sheets and walls to become cumulative as we went along. It’s actually kind of hard work holding up that sheet while trying to place it properly: 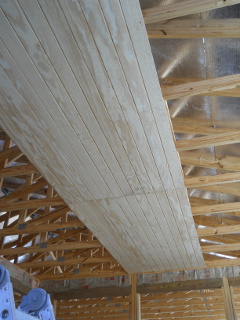 And here is the ceiling after the day’s work, facing southeast. You can see that we got everything done except that last row to the left: 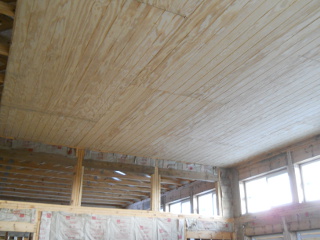 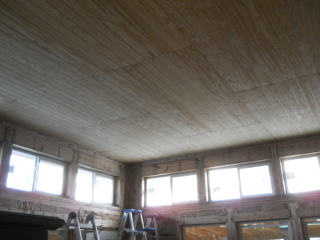 And then one of the men graciously offered his time on the next Lord’s Day community visitation day to help me put up the last row (which included much smaller pieces width-wise, so just the two of us were able to handle it): 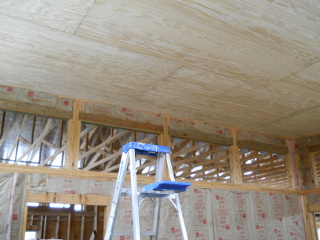 Much gratitude to the community work day ceiling crew! 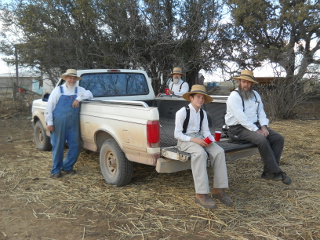 And then it was time for the community work day fellowship meal. Everyone says “hello”, by the way: 🙂 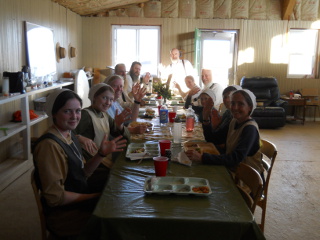 We are once again very thankful to God for granting progress on the house. He’s gracious and merciful in allowing it to continue, and for allowing us the fellowship of the brethren here, in general, in serving one another. It is Sue and my prayer that she and I especially (and of course all of us) grow more in servanthood to Christ and His people.

Leave a Reply to Ann from KY Cancel reply